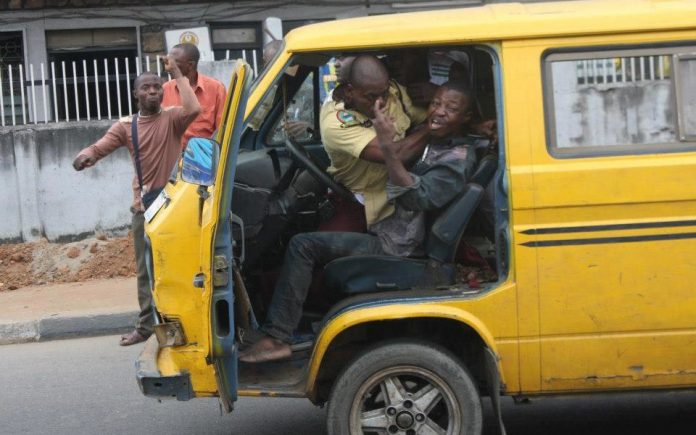 A motorcyclist was confirmed dead from an auto crash caused due to negligence of a bus driver and unprofessional act of a (Lagos State Traffic Management Authority) LASTMA officer.

The Apongbon area of Lagos state was thrown into noise and confusion zone as a motorcyclist named as Abanna meets an untimely death on the hands of a bus driver dragging the bus steering with a LASTMA officer.

According to a report from Punch newspaper, the motorcyclist was hit and confirmed dead after the LASTMA officer flagged down the bus driver for violating traffic law. While the commercial bus driver tries to evade arrest and zoom off, a LASTMA officer swiftly pounced on the driver and struggles to stop the bus.

While the driver and the officer were struggling with the bus steering, the bus driver lost control and rammed into the motorcyclist who was immediately confirmed dead on the spot.

Following the ugly incident, the Public Relations Officer in the Lagos state Police, DSP Bala Elkana, said the motorcyclist corpse had been deposited at the Mainland Hospital mortuary, Yaba, and investigation had commenced to discover the true fact about the incident of the auto crash.

On Sunday, 19th of Jan. Six (6) people was reported to have met their untimely death following a road accident which involved a trailer and a commercial bus at Abuduka area along the Ogbomosho- Ilorin expressway in Oyo state. While seven (7) other passengers sustained injuries.

According to a report, the auto crash was said to have happened around 10 am on Sunday. When the driver of the trailer lost break control and rammed into a fully loaded eighteen (18) passenger bus, resulting in instant death of six (6) passengers.

According to an eye witness who reported, it was gathered that, the people of Abuduka tried to apprehend the trailer’s driver over the ghastly accident but failed as he reportedly forced his way out of the trailer and escaped from the accident scene.

The Federal Road Safety Corp (FRSC) Commander in Oyo State, Mrs. Uche Winifred confirmed the auto crash and disclosed that the seven (7) other injured passengers have been taken to LAUTECH teaching hospital for emergency treatment.

The truck driver was said to have lost break control and rammed into a three-passenger commercial tricycle. The three passengers were confirmed dead, while one other person was injured.