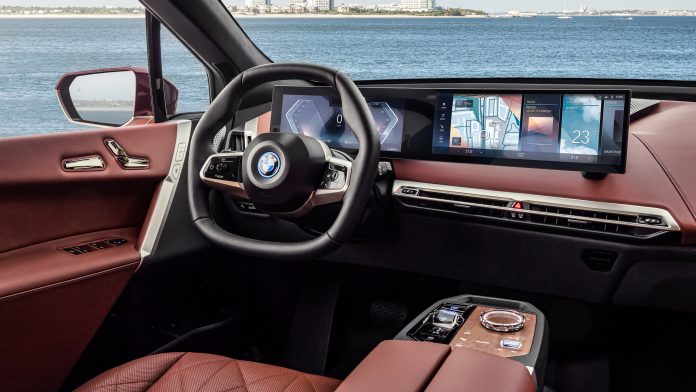 BMW’s latest infotainment system, called iDrive 8 which aims to offer a better user experience than the previous iDrive 7, with enhanced voice-recognition software, a large touchscreen, and plenty of new features.

While iDrive 8 will eventually multiply throughout the rest of BMW’s portfolio, it will debut later this year on the new electric iX SUV and i4 sedan. The interface will be sourced through a huge curved display on the dashboard. There will also be a 12.3-inch fully digital instrument panel perfectly connect with an enormous 14.9-inch central touchscreen.

More and more automakers are starting to dump physical switchgear for touch controls, so it’s important that BMW’s newest iDrive system will continue to offer its designating feature and a center-console-mounted rotary controller. Even though the iDrive 8 has about half as many buttons and switches as its predecessor, users can easily pick their preference between physical controls, voice commands, and touch inputs.

BMW puts stronger importance on dialogue-based interconnection and natural voice recognition with iDrive 8. The system’s artificial intelligence, called BMW Intelligent Assistant can effectively visualize itself on the display screen and even differentiate which passenger is talking to it.

Other notable additions to iDrive 8 include increased personalization options through the new BMW ID and My modes. The former feature allows users to design a profile and save different vehicle settings, basically replacing the current BMW Connected Drive.

My Modes is a similar feature of iDrive 8 that’s set to replace Driving Experience Control on future BMW vehicles. The first version that’s available on the BMW iX and i4 allow up to 10 or more customizable and preset settings that can be applied to the color of the interior ambient lighting and the appearance of the dashboard displays.

Every iDrive 8 system provides popular content such as Apple CarPlay and Android Auto capability, and it can operate with 5G mobile technology.