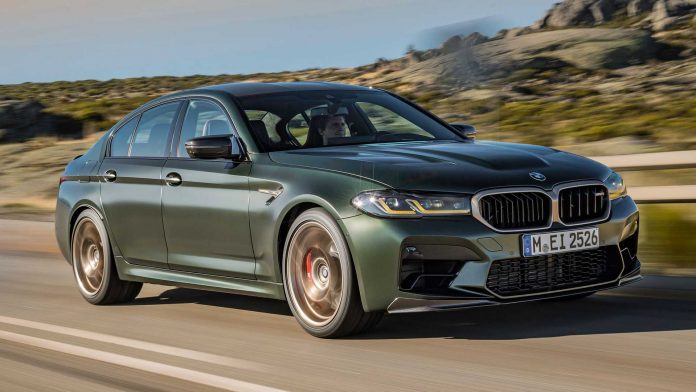 The BMW M5 CS is a high performance variant of the BMW 5 Series marketed under the BMW M sub-brand. It is considered an iconic vehicle in the sports sedan category.

BMW builds some seriously fast sports cars, and the German manufacturer has really been pushing the boundaries with its range of M cars in recent months. The latest warrior to join the stable is the 2022 BMW M5 CS. This hyper sedan is the fastest production BMW ever and whereas the M badge used to represent a standalone model, the CS brand now places this M5 in the top tier. Recently we got a proper look at the production model, and the numbers are astounding, but what is it like on the road? The incredible car sprints from 0 – 100 km/h (62 mph) in just 3.0 seconds, and from 0 – 200 km/h (124 mph) in 10.3 seconds. Top speed is an electronically governed 305 km/h (189 mph).

BMW’s official press release lists the most expensive figure in France at €199,900. Head over to Germany, the BMW M5 CS starts a bit cheaper at €180,400. France is known to have some of the highest new-car prices in Europe, and when you’re talking about a high-performance machine like the M5 CS, a spread of approximately €20,000 isn’t out of the question once various taxes and fees are added. However, in the States, the price starts at an equivalent of just €117,000.

The 4.4-litre V8 engine with 467 kW/635 HP makes this particular car the most powerful car in the history of BMW M brand. The exclusive special-edition model treats four people to an extraordinary driving experience and blends standout performance attributes with an exclusive and luxurious appearance. As the flagship model in the range, the spectacular BMW M5 CS represents the highest rank of the BMW M ladder and sets new standards with its standout performance attributes combined with an exclusive and luxurious appearance.