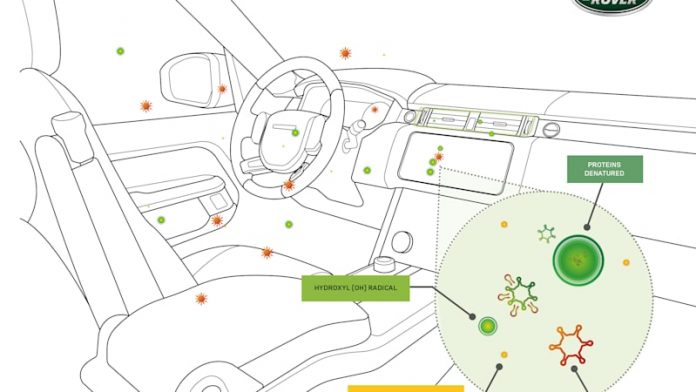 Jaguar and Land Rover is presently developing an air filtration system that inhibits up to 97% of viruses and airborne bacteria. Created just like a face mask for a car’s HVAC system, it’s built on Panasonic’s Nanoe X technology.

Most of the company’s models including the new Land Rover Defender currently come equipped with Panasonic’s Nanoe technology and PM2.5 filtration. Nanoe X is ten times more effective because it depends on a high voltage to create trillions of hydroxyl (OH) radicals enfolded in nano-sized water molecules. Think of them as Roman guards in front of a fortress, they keep bad substances out and ensure only the good ones can come in.

Viruses and bacteria particles are denatured when they come in contact with a filtration system, meaning they can’t produce new viruses or grow bigger. The hydroxyl (OH) radicals also have common allergens and mold, but they are definitely harmless to humans.

Jaguar and Land Rover say it’s not depending on computer simulations to decide whether its filtration system works as invented. They asked British laboratory Perfectus Biomed to carry out some tests that simulate a ventilation system in recirculation mode for about a 30-minute cycle in a closed room. The results were really encouraging, 97% of viruses and airborne bacteria were nuked. Jaguar and Land Rover said Panasonic’s Nanoe X technology has independently proven to inhibit 99.995% of coronaviruses during a two-hour laboratory test performed by French immunology lab Texcell.

Future vehicles and models from Jaguar and Land Rover will use this technology, though a representative for both companies didn’t say when it will reach production, and which nameplate will be used on it.

Meanwhile, Honda also launched its own coronavirus killer. It’s a cabin air filter sold as an actual replacement part that comprises four layers, including one coated with a functional substance of fruit extract that deactivates nearly 100% of the viral aerosols it captures.