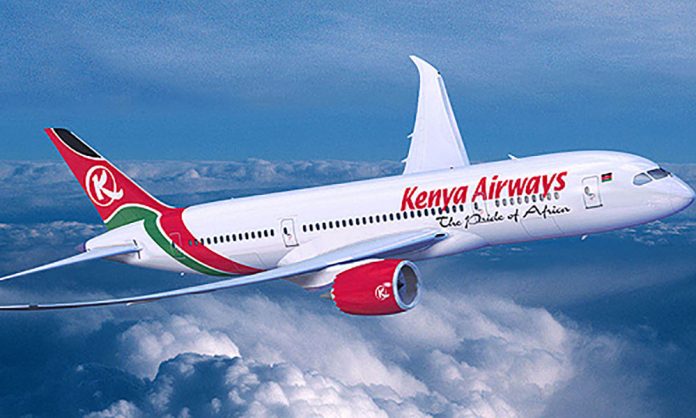 Discussions on nationalization continue as Kenya Airways (KQ), posts a historic loss of over $330 million for the year 2020. Passenger numbers reduced by two-thirds, and the share loss increased massively.

Apart from rear cases, different airlines’ financial results coming in for the full year of 2020 are really worse due to the coronavirus pandemic and a lot of accounts made some historic losses. Kenya Airways announced today that its pretax losses for 2020 amounted to 36.57 billion shillings which are approximately $333.2 million, about to double the sum from the previous year.

Kenya’s Airways Chief Executive Officer, Allan Kilavuka said that the number of passengers dropped from 5.2 million in 2019 to 1.8 million during the year currently under review.

In December, Kenya Airways and Air France-KLM announced that they would be canceling their joint venture. The joint venture which has already been suspended due to the ongoing crisis, the agreement will now officially end on September 1st, 2021. Air France- KLM still owns 7.8% of Kenya Airways. The remaining shares of the airline is been divided, with 48.9% of the airline owned by the Kenyan government, 38.1% to the KQ Lenders Company, and the rest to private shareholders.

Several individuals have called for the airline to be privatized, which the country’s Treasurer has also said it would favor as a long-term plan. However, early this year, it was said that Kenya’s Treasury had approved a further 10 billion shillings which are approximately $91 million. Kenya Airways first look for state-aid which is a result of the COVID-19 crisis in March last year, having stopped all flights on March 22nd after the government gave the order.

Even before the coronavirus pandemic, the airline was struggling in different aspects severely. With a loss of $258 million in 2016, Kenya Airways almost went into bankruptcy due to a tremendous amount of debt, and owners were threatening to collect their aircraft.