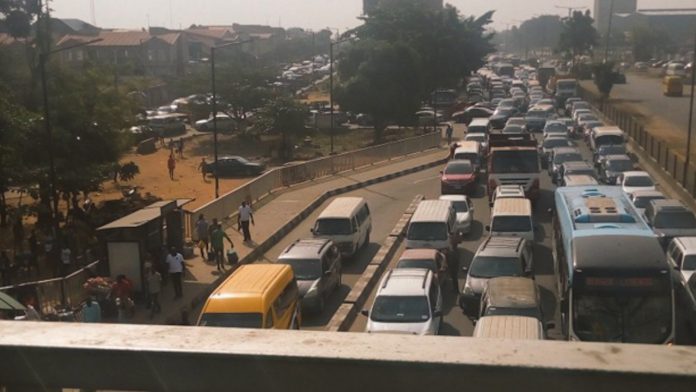 The Lagos-Ibadan expressway traffic strucks anger from motorist plying the road. As at 5:00 am on Wednesday 15th of January 2020, there was an emergency traffic advisory that warned road users about the standstill traffic on the road.

The logjam continues to stretch longer by the day for both those leaving Lagos and more especially motorist coming into Lagos from Ibafo and Mowe axis. The traffic jam was reported to have occurred due to the rehabilitation on some part of the road, shrinking the number of lanes to just two lanes.

According to an eye witness who posted:

“If you are coming to Lagos through the Lagos-Ibadan expressway, please find alternative route if possible. The whole witches and wizards in Nigeria are having their first AGM. That traffic is crazy, a standstill from MFM to Berger. I trekked from Mowe to Berger because of traffic and all the while, no vehicle moved an inch. I got to work very late and I have been useless since at the office. And to think I will still face the same traffic on my way home. I am just tired of Nigeria.”

For everyday motorist plying the Lagos-Ibadan road, yesterday was a horrible day for them, as the long standstill traffic cost them a whole day.

Some motorists are forced to abandon their vehicle to look for bike men, while others trek several kilometers just to get to work as early as possible. Other motorist without alternative stay groaning in traffic for several hours following a gradual traffic diversion by Julius Berger construction giant on the Kara link bridge.

The Lagos-Ibadan traffic was also worsened by a truck accident. The truck lost its break control and ran into the concrete barricade used at the diversion points crossing the two lanes reserved for the narrow movement of vehicles.

Motorist are advised to use alternative route to get to their destinations. The traffic on the Lagos-Ibadan expressway towards the Berger axis is unpredictable for now. Following the road diversion into two lanes, makes smooth movement difficult.

Motorist are strongly advised to use alternative routes, and only drive when necessary to reduce the number of vehicles plying the road until the rehabilitation is completely done.