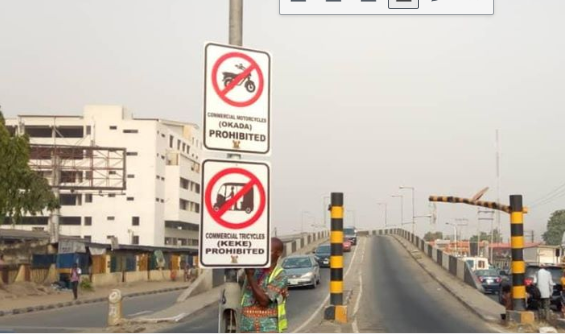 In the ongoing efforts of the Lagos traffic law agency to creating awareness on Lagos state traffic law. The agency recently renewed the effort towards restricting the operations of commercial motorcycles, bikes and tricycles on some specific highways and bridges in Lagos state.

The agency already commenced the installation of two thousand prohibition signs and caution symbols. The signs and symbol poles are strategically mounted on the major highways and bridges across the metropolis.

On Friday, 17th of Jan 2020, the Lagos state Commissioner of Transportation, Dr. Frederic Oladeinde. He stated that a good number of the road signs and symbols indicates the areas where the operations of the motorcycles and tricycles were prohibited.

Dr. Frederic also stated that, the prohibition symbols are signs of warning, and anybody found guilty to have violated the law after this effort would face the consequence of law.

The Commissioner also added that, the road prohibition signs which have been mounted on all major highways and bridges across the metropolis including; Lagos-Ibadan Expressway, Lagos-Badagry Expressway, Agege Motor Road, Apapa-Oshodi Expressway and Third Mainland Bridge would further create traffic law awareness on prohibited areas as prescribed by the Lagos state government.

“We urge that they comply for safety of their lives and members of the public, as we will apply the law on any erring rider that violates our law,” Dr. Frederic stated.

Furthermore, the Commissioner of Transportation, in person of Dr. Frederic strongly affirmed that the restrictions of commercial motorcycle and tricycle operations still remains intact on some specific routes especially Apapa, Ikoyi, Surulere, Eti-Osa and Lagos Island.

He added that those specific routes would soon have the new road signs mounted there adequately to further create the awareness for road safety culture.

The Commissioner concluded his speech

By urging Lagosians to cooperate with the government’s efforts on the renewed Lagos traffic law to tackle traffic jams and engrave safety consciousness in the minds of the road users.

Here is the Lagos State Traffic Law PDF Guide in case you are yet to read it.

Learn more on car driving safety tips you need to maintain your vehicle.