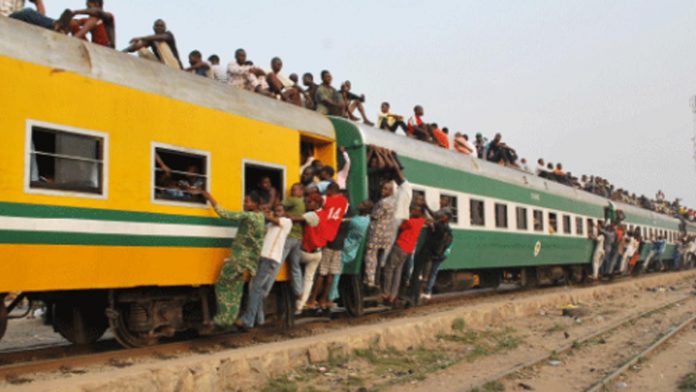 After the recent rehabilitation of major rails across the country, commuters of Lagos train station use the on-going train project opportunity to plead to the Federal Government on the Lagos-Ogun Mass Transit Train Services (MTTS). The management of MTTS have equally called and reach out to the Federal Government to rehabilitate or if possible, replace the train engines and coaches on the narrow gauge and improve the train service capacity.

The concerned commuters at the Lagos train station, while speaking with the News Agency of Nigeria Correspondent onboard the Lagos-Ogun train. To monitor the Mass Transit Train Services (MTTS) operation, said that the train locomotive engine needs an upgrade, improvement and replacement of some important components.

According to the complains of Lagos train station commuters heading to Ogun state. They suffered a lot to move around when the Nigerian Railway Corporation (NRC) shut down its operations around September 2019, and resumed back its operation on Jan. 23, 2020.

According to one of the literate commuters at the Lagos train station, Mr. Matthew Omoniyi, a stockbroker speaking at Ebute-Metta, Lagos Railway Station before boarding to Ogun state. He added that train services on a narrow-gauge line returned with some efficiency but with old locomotive engines and coaches.

He noted that “The Lagos train station service has recently improved but unfortunately, we cannot continue to see the current old locomotives engines and coaches on the new narrow gauge, they must be rehabilitated, renovated and even replaced.

“The Nigerian Railway Corporation (NRC) is still using the old coaches and old locomotive engines that are not functioning well. Occasionally, the engines frequently break down in the middle of short distance journey and passengers are left stranded halfway.

“It will be more efficient if the Nigerian Railway Corporation (NRC) could actively engage the Federal government either to maintains and renovate the old engines or scrap them and bring in new engines. For instance, the current locomotive engines at the Lagos train station cannot pull more than 12 or 14 coaches at a time. Which is not good enough for a large city like Lagos with thousands of daily commuters.

“If the Lagos train station engines can be renovated or replaced to pull up to 25 coaches, most of the challenges of overcrowding and sitting on the rooftop of a moving train among others, will be minimized for improved safety and security of the commuters.