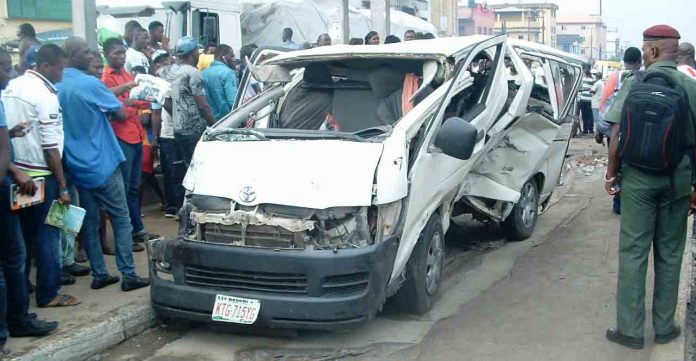 Cruising into the year 2020 has brings a lot of ups and downs to all road users leading to several cases of road accident in Nigeria within the shortest possible time into 2020.

According to Agaju Madugba, from Katsina state Nigeria, who reported. At least 22 people in a bridal convoy escorting a newly wedded bride to her husband’s home ran out of luck and perished last Saturday’s evening 15th of Feb. In a fatal automobile accident along Kankia-Danja Road, Katsina State, Nigeria.

While Seventeen other passengers of the convoy sustained several degrees of injuries and were immediately rushed to the nearest hospital. However, the bride was so fortunate to have miraculously escaped the accident unhurt. Road accident in Nigeria is a daily incident that occurs in almost every state across the country. The deadly crash was reported to have involved two J5 buses in a head-on collision.

The road crash, involves an eighteen-seater bus belonging to Okomu Oil Palm company and a truck. The ugly incident was reportedly said to have occurred when the two vehicles were avoiding the road sides bush fire. Eventually both vehicles got burnt by the bush fire on both sides of the road.

Seven people were confirmed dead in another ghastly auto crash at Sango old tollgate, on the Lagos-Abeokuta Expressway, Ogun State on the 15th of Feb.

The accident was reported to have occurred due to negligence, excessive speeding and mechanical faults on the part of the Dangote’s cement truck which rammed into the other two passenger vehicles.

Road accident in Nigeria has increasingly become a daily incident. The FRSC encourages all road users to stay cautions and drive safely on the highway minimize avoidable road accident.