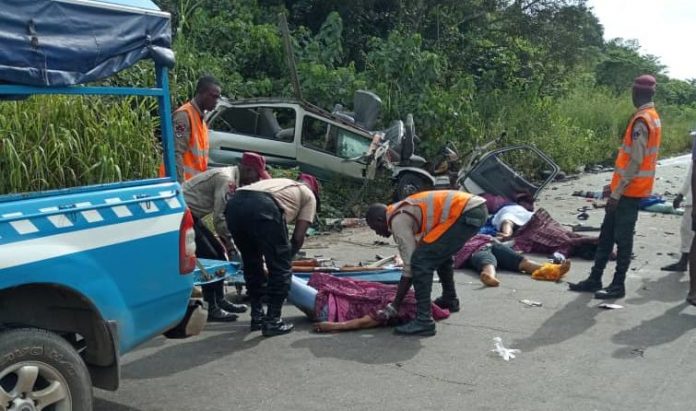 Mr Godwin, who added that no fewer than 88 FRSC workers were knocked down in 2019, added that another fresh case of 8 workers had been knocked down in the last one month, January 2020. He specifically noted that: “The number of lives lost annually to road accidents in Nigeria cannot be equated with the loss of lives to Boko Haram insurgent attacks in the northern parts of the country. “Many lives had been lost to road accidents in Nigeria and others road users do fierce death on a daily basis,” he said.

The Zonal Commander further advised motorists and other road users to always exercise cautions and patience while on the road by not indulging in unnecessary speeding prone to accidents. The zonal commanding officer also added that the end-of-the-year awards’ night party in Akure, Ondo state was organized, to appreciate members for team effort and essentially, to give thanks to God for safeguarding the command through the hurdles of 2019.

According to the Commander, the zone as always strive to record a downward trend in number of road accidents, crashes and fatality rate. He also used the occasion medium and press release to implore other FRSC personnel not to relent on their oars but to do more and further safeguard the precious lives of our people in 2020 and beyond.

The FRSC encourages all motorist and other road users to stay cautions and drive safely on the highway minimize avoidable road accident.