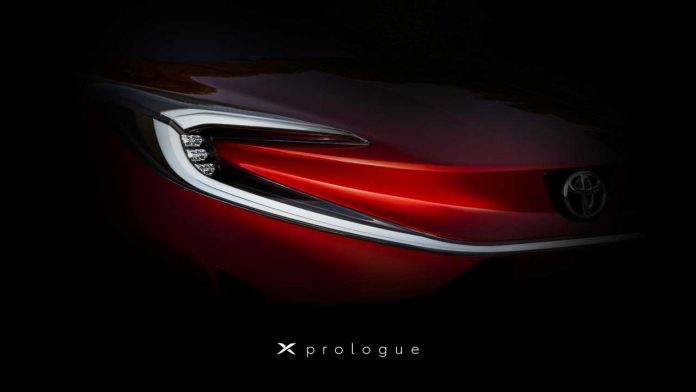 Toyota has revealed some new teaser for a vehicle called the Toyota X Prologue, which will debut next week on March 17. The Japanese automaker is not providing a lot of details for now, even though we do get a teaser image of the upcoming model.

Based on what we have seen, the Toyota X Prologue will have a distinctive lighting signature. The daytime running lamps (DRLs) at the front wrap around what looks to be a closed-off fascia, while the main headlamp elements are moved in the corners.

These hints or signs don’t really help us know what sort of car Toyota plans to show, but there are rumors going around. One of those rumors indicates the concept to be a preview for the company’s new city car to succeed the Aygo, which will be built on the TNGA-B platform. The suggested title for the new Toyota’s release (Toyota X prologue) also seems to look or sound like a small car.

Toyota also said that affordability will be an important point of the new A-segment model, and as such, will feature a standard internal combustion engine. The Toyota logo on the X Prologue is actually black, which proposes an ICE, given that the company uses blue-accented badges for the electrified models.

Another theory is that the Toyota X Prologue will review the company’s fully-electric SUV built on the e-TNGA platform, which was created in collaboration with Subaru. Last year December, Toyota teased a mid-size SUV built on the architecture, saying that it will be reviewed in the coming months

Subaru is helping Toyota in the development of the midsized crossover and is likely to get its own version of the model. The design or styling of the vehicle reportedly looks really similar to the brand’s unnamed EV concept from 2020. There’s definitely a similarity in design between the unnamed EV concept from 2020 and what Toyota is showing off for the upcoming E-TGNA vehicles.