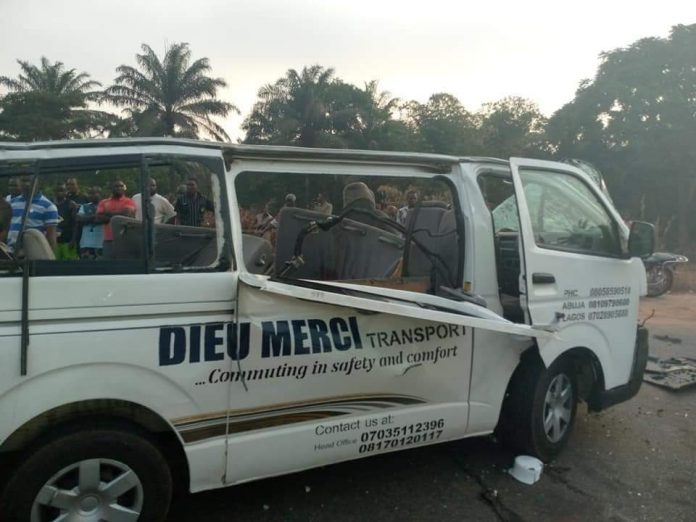 Cruising into the year 2020 has brings a lot of ups and downs to all road users in Nigeria. Several road accident scenes have occurred in the shortest possible time into 2020.

Two persons was reported dead, while others fierce death in a deadly road accident in Ogun state on the 12th of January 2020. The accident was said to have occurred in Akankan Village through Olodo, Abeokuta-Ibadan Express way.

The Ogun State Traffic Agency Officer (TRACE). Mr. Babatunde Akinbiyi, reported to have confirmed the road accident incident on Sunday morning said, the accident involves a truck, which flipped. It was later confirmed that the truck driver lost break control due to over-speeding on the highway. Two passengers on the truck was reported to have died instantly while others got injured.

Mr. Ogbonnay Kalu, the Sector Commander of the Federal Road Safety Corps in Enugu, confirmed the road accident and confirmed six people dead on the spot. The crash was said to have occurred at Opi Agu Nsukka-Enugu bypass road, Nsukka Local Government.

The crash was said to have involved a hummer bus traveling from Kaduna to Rivers and a tipper truck loaded with sand. Asides the six dead victims, other passengers who sustained serious and minor injuries were rushed to Bishop Shanahan Hospital in Nsukka for first aid treatment.

The FRSC representative also added that the affected vehicles involved in the crash had been towed. For further investigations on the cause of the accident and to give way for smooth traffic on the road.

As at the late hours of yesterday 13th of Monday, 2020, two people was said to have been burnt to death in Lokoja as trailer crashes

The ugly road accident was reported to have occurred at Felele location, on the outskirt of Lokoja, the capital of Kogi state.

According to an eye witness report, the incident involves a truck fully loaded with bags of cement plying the Abuja-Lokoja Highway, when the driver of the truck lost break control and crashed into a heavy barricade at the corner of the road. Further resulting in the truck somersaulting and cut fire, the two passengers on the truck got burnt to death before the rescue team arrive.

The FRSC officers and Fire fighters later arrived at the scene to redirect and control traffic, as well as putting off the inferno to avoid further explosion of nearby petrol stations.