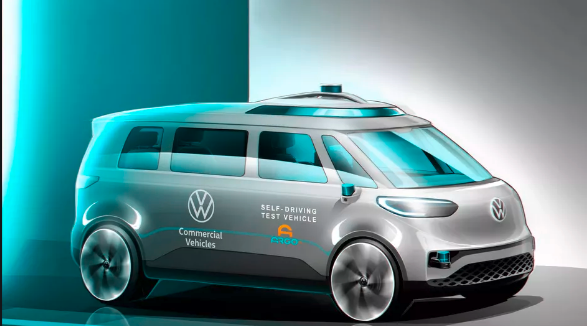 The Volkswagen ID.Buzz is going to be a notable model because it will be the first time Volkswagen has actually brought a retro Microbus to production, and an electric one to be precise. But that significance goes further, as the company revealed it will be the basis for its first road-ready autonomous vehicles. Prototype testing has already begun this year, and the plan is to have autonomous models out before or in 2025.

Volkswagen declared today that it is aiming to have a Level 4 autonomous ID.Buzz van. Its expected electric minivan will be in service for commercial use by 2025 as said in the first paragraph. The German automaker announced that it is currently organizing field testing in Germany using technologies invented by Argo AI, a self-driving startup both Volkswagen and Ford have invested in. Argo AI’s tech will be used in the Volkswagen ID. Buzz van and rolled out in 2025.

Volkswagen said that the commercial use of the ID.Buzz vans will be similar to that of Moia, a mobility company started back in 2016 that’s part of the Volkswagen Group. Moia, which has its own Moia-specific electric van, is a ride-sharing system working in two German cities.

Level 4 autonomy means that the Volkswagen ID.Buzz van will be able to function perfectly without human input, but only in certain geographic areas. Presently, there are not any automakers offering that kind of level of automation, but Honda has said that the next generation of its Legend sedan will have Level 3 autonomy in Japan.

Volkswagen declared late in 2019 that in 2022, it plans to unveil a self-driving Volkswagen ID.Buzz in Qatar for the 2022 World Cup. The vehicle will be used as a means of public transport, running on semi-fixed roads.